The Wachowskis know how to produce a spectacle. In that, they may very well be the cinematic heirs of Cecil B. DeMille, whose films featured showmanship of the highest caliber, but some of whose films could be described as insubstantial. And such is the case with the space saga, JUPITER ASCENDING, a film chock-a-block with whiz-bang special effects, and an effulgent art direction that steals the film right out from under its actors. In fact, the most imaginative efforts to be found in the entire opus might well be the elaborate headdress the eponymous heroine sports at her wedding.

In the classic mold of the hero’s journey, that heroine, Jupiter Jones (Mila Kunis), starts life inauspiciously, little realizing that her genetic code is a sort of holy grail. A stateless refugee from Russia, she spends her days as a house cleaner, with special emphasis on toilets in the montages given up by the Wachowskis. One day her destiny arrives in the person of

Caine (Channing Tatum), an expressionless warrior with jet boots and pointed ears. He saves her from a fearsome gaggle of reptilian aliens intent on Jupiter’s demise, and, after destroying a sizable chunk of Chicago, fills her in on true history of planet Earth, including how the overlords have been so effective at covering their tracks. Even destroyed sizable hunks of Chicago. There’s more.  Much more in a notably well though-out back story that includes an explanation for the extinction of the dinosaurs, alien probes, and crop circles. We also learn that bees have an infallible sense of royalty, and that the eccentric beekeeper down the road, in this case Sean Bean living in a house covered inside and out in honeycombs, may have more than just a few extra skeps in his storage shed. 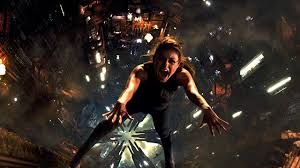 Alas, the plot is less interesting, consisting of a repetitive series of last-minute rescues of Jupiter by Caine, brightened only with a pointed metaphor about the meaningless of human life in a corporate universe, and a jubilantly campy performance by Eddie Redmayne as one of three dicey siblings who have a vested interest in Jupiter. Parenthetically, it can’t be good for Redmayne’s Oscar™ chances for THE THEORY OF EVERYTHING that this film is hitting theaters just as the voting for that award is starting. One remembers what NORBIT did for Eddie Murphy’s Oscar™ chances in DREAMGIRLS.

The mood switches from broad, badly executed comedy (think a rip-off of BEETLEJUICE without the wit) to melodrama with barely time to take a breath between leaps of idiom. Plus, as beautiful as both Tatum and Kunis are, there is no real chemistry to their forbidden love (apparently the pointy ears are due to wolf genes having been spliced into Caine’s genetic mix).  Kunis is faultless, transmuting the helpless spunkiness written into her character into a fierce warrior spirit. The chemistry vacuum arises more from Tatum’s character, and the question arises, why cast a hunk like Tatum, who has such a charismatic personality and then hold it in check?  Add a dash of technical incest, too many stock characters, and the sort of loose ends that warn us of an impending sequel.  Perhaps two. There are, after all THREE siblings involved. The result is a disquieting pastiche with a climactic final sequence that is obviously driven by the maxim that nothing exceeds like excess.

It certainly has the look of a blockbuster, but then, so did DUNE.  The hopes and dreams of a group of people hoping to turn JUPITER ASCENDING into a blockbuster of a franchise are palpable in every minute of this bloviated effort, adding an element of irritating poignancy to the overall disappointment.