What I Learned at the 2015 San Francisco Silent Film Festival

It is only a week since the 2015 Silent Film Festival wrapped with a screening of BEN-HUR that included its 10 Technicolor™ sequences?  Garbo, Gilbert, the silent version of ALL QUIET ON THE WESTERN FRONT as powerfully anti-war now as it was in 85 years ago, Charley Bowers surrealistic visions, and MAN RAY’s foray into experimental film, and a dozen or so other priceless moments in the plush-lined seats of that silent movie palace, the Castro Theater. The mad whirl was something to be savored at the time, and pondered in retrospect. Hence this posting distilling the experience into ”What I learned at this year’s San Francisco Silent Film Festival.”

First of all, that live musical accompaniment means that every screening is a unique,

irreproducible performance, the perfect combination of music as story element, and an audience that understands and appreciates the nuances of both.  The spontaneous applause that followed the musical and visual shock of Emil Jannings’ pathetic demotion in 1924’s THE LAST LAUGH raised the emotional pitch of that moment into a veritable apotheosis of filmmaking as high art. 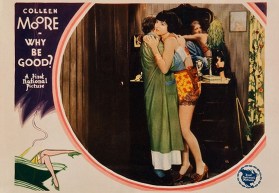 The trombone of the Mont Alto Motion Picture Orchestra interpreting the drunken serenade outside Colleen Moore’s house in the 1929 flapper romantic comedy WHY BE GOOD? was better than any human voice could have been in that moment as it interpreted intoxication, joie de vivre, and a mischievous sentimentality.

1916 SHERLOCK HOLMES. This was the actor’s signature role, played on the stage for decades before he committed it to nitrate. It’s also the actor’s only appearance in film. The revelation here was the sentimentality found here is as integral to the story as the great detective’s Meerschaum pipe. True to its time, the final intertitle proclaims “And Holmes stayed.” No modern film would dare to explore that part of Holmes’ so directly, and yet it’s on the page in Arthur Conan Doyle’s story. Better to say, perhaps, that no modern film could reproduce that sensibility that is no longer a part of our zeitgeist, yet when done so superbly, even that zeitgeist can’t prevent us from being swayed by it.

And then there’s the accidental silent. Frank Capra’s first talkie, 1929’s THE DONOVAN AFFAIR survives as a print, but the Vitaphone disks on which the sound resided are, like so much from the early cinema, gone. The Gower Gulch Players lip-synched the dialogue, foley was added with a piquancy that made the sound of seltzer issuing forth into a glass of scotch not just a sound, but a plucky secondary character whose function became that of puckish comic relief.

One of the high points, of the many I hasten to add, was when Serge Bromberg (interview here), founder and director of Lobster Films, proved that he’s not only a brilliant film historian/preservationist/enthusiast, but also one of the best showmen on the planet. After receiving the 2015 San Francisco Silent Film Festival Award before a screening of one of his favorite rescues, the psychologically astute VISAGE D’ENFANTS from 1925, he celebrated the award, and the 30th anniversary of Lobster, by demonstrating to the packed Castro Theater audience exactly what happens when nitrate stock, the original stuff of the truly silver screen, catches fire. As, alas, it did all too often.  I have always wondered, and now I know, and now you do to.

The picture is below. 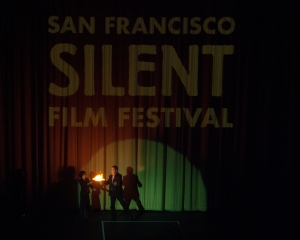 In THE DEADLIER SEX, a 1920 vehicle for Blanche Sweet, I learned that Boris Karloff looks suitably menacing even when sporting a Zouave scarf as a belt, trousers with an unsuitably festive pattern printed on them.

More seriously, in 100 YEARS IN POST-PRODUCTION I learned that African-American actors wore blackface on stage and in film, but that when Bert Williams (pictured left) did it in his unreleased 1914 film, LIME KILN FIELD DAY, he was the only one to do so.  According to the film’s restorer, Ron Magliozzi, Associate Curator, Dept of Film, MOMA, this was so that the other actors would not have to. His presentation on the life and work of Bert Williams, whom W. C. Fields called the funniest man he ever saw and the saddest man he ever knew, was revelatory for what it unearthed about the racism of that time, and how the release of D.W. Griffith’s BIRTH OF A NATION was probably the reason for LIME KILN never having been edited, much less released. In a move as bold as it was instructive, Magliozzi preceded the clips from LIME KILN with some from NATION, providing a startling context, as well as better understanding, of what actors of color were forced to deal with.

Then there was Kevin Brownlow.  He’s a legend. The first book I ever read about silent cinema was his “The Parade’s Gone By.” That is

true of most people who love this art form. He is credited with re-introducing silent film to a world who have forgotten it in the wake of talkies.  In conversation with Bromberg before the closing night screening of 1924’s BEN-HUR, he recalled his introduction to silent films at his school, which was too, ahem, frugal, to indulge in the expense of showing more current films to its student body. Most people know that story, but Brownlow, an irresistible mix of erudition and wit, makes the tale sparkle. The same is true of inviting silent cinema star Bessie Love to tea with his family when he was still a youth, only to have his the blitz-addled home welcome her with a mishap, the which she laughed off.  It was, as they say, the start of a beautiful friendship.

My favorite discovery during this meeting of minds, though, involved one of Brownlow’s many searches through film archives wherein he discovered a mysterious canister labeled “DeMille Operations.” Thinking he had found a record of Cecil B.’s behind-the-scenes work, he was dismayed, and made the audience roar with laughter, when he discovered the film was a record of Mr. DeMille’s gall bladder surgery.

This is why the San Francisco Silent Film Festival is indispensable. Film, context, and the warm nurturing circle of people who are as obsessed with silent film as I am. Not to mention that this year in the Starlight Lounge, providing treats of all kinds, including mingling with the festival guests, I discovered the joy of adding rum to my coffee. It was a cold day in San Francisco, and it was, initially at least, purely for medicinal purposes.  As a way to stave off the inclement weather, it is the perfect prescription. As a delightful beverage to quaff while watching films made during Prohibition, it’s a smug, semi-guilty pleasure.

Click here to listen to SFSFF Artistic Director Anita Monga on the 2015 festival.