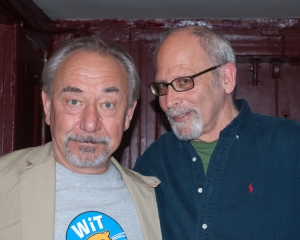 There have been tributes to Robin Williams, and there will be more, including a special remembrance on the upcoming Emmy Awards. None will be as heartfelt or more fitting than the one that took place at the Roxie Theater on Saturday, August 23. Organized on the fly by ace programmer Elliot Lavine, and hosted by Robin’s stand-up colleague and friend, Will Durst, it was a low-key event where we could be reminded of what a fine actor Robin was when fate and Hollywood and his finances allowed.The Supporting Actor Oscar™  he won for GOOD WILL HUNTING might just as easily have been for Best Actor in GOOD MORNING, VIETNAM. Those are also the obvious choices when listing Robin’s credits. Levine, though, always a puckish maverick, programmed MOSCOW ON THE HUDSON and AWAKENINGS. In the former Robin plays an apolitical Soviet defector discovering that the American Dream has a dark cloud as well as a silver lining. In the latter, he played a fictionalized version of Oliver Saks (who became one of Robin’s friends) and as good as he was in MOSCOW, this Robin at his sweet and sensitive best playing a shy neurologist cracking the mystery of catatonic patients. His co-star, Robert de Niro in a much showier role full of tics and contortions and paranoid outbursts, was formidable thespian competition, yet Robin with his essential humanity and 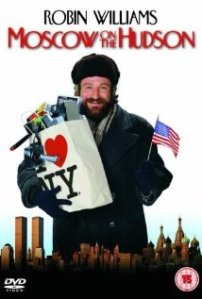 unswerving compassion held his own and then some. By contrast, de Niro’s performance is all bells and whistles. Robin’s is the shining light of Buddha nature made manifest.

Durst introduced the first film, MOSCOW ON THE HUDSON, and he, too, used the word light when talking about Robin (it seems wrong to not call him by his first name). Durst opined that the world is a little darker because there is a light gone out for which there is no replacement bulb. And he’s right.

Self-deprecating and incisive, Durst confessed that Robin was more a friend of Debbie’s, Durst’s wife, who performed with him at long ago “spaghetti jams” in one of the two tiny back rooms the Spaghetti Factory in the days before Robin had found fame as Mork from Ork. The other room hosted flamenco dancing. According to Durst, and the plethora of pictures attesting to it, Robin was a club rat, heading to the comedy clubs in whatever town he was in, sometimes doing an impromptu set, always taking his picture with whomever was performing, or there to see a performance.

When it came to talking about how Robin left us, Durst was honest. He was, he said, pissed off that Robin had confirmed the stereotype that all comedians have a dark side. “Mine is indigo, not black,” said Durst, before talking with a some bitterness about all the media people who wouldn’t call him back when he had a project to promote, but who burned up his phone lines wanting a quote when Robin died. And even with them begging, Durst said he just couldn’t do it, while, he added, neither could Debbie, who has cried every day since it happened.

He went on to talk about how Robin never forgot where he came from, paying the liquor bill for the now-defunct comedy landmark, The Holy City Zoo, where he and other local stand-ups would perform and then hang out.

The next San Francisco Comedy Day will be another tribute to Robin, Durst promised, before praising Robin’s work in MOSCOW ON THE HUDSON, and how director Paul Mazursky knew exactly when to rein in Robin, and when to let him play. He also confessed, in answer to an audience question, that he love FLUBBER, which he acknowledges is a crappy movie, but a funny one, and that is favorite Robin film is POPEYE, which got a round of applause from those assembled. “Perhaps,” Durst teased us, “we’ll do a festival of films we’re embarrassed to admit we like”, to which Levine retorted, “That’s what we do at the Roxie”.

Somehow, locals celebrating a local boy who made good was the perfect, and perfectly bittersweet, way to say goodbye to someone who had the talent to make us both laugh and to cry on screen, and who filled the world with a special light no matter where he was.

And here’s to looking forward to 3 STILL STANDING, a funny and insightful documentary profiling Durst along with other local comedy legends Larry “Bubbles” Brown and Johnny Steele, and featuring, of course, Robin as one of the talking heads. Rumor has it that it’s finished and ready for its premiere.

This entry was posted on August 25, 2014 by Andrea Chase in cinema, film, Movies, Uncategorized.