To say that filmmakers Michele Stephenson and Joe Brewster were fearless when depicting their family honestly in AMERICAN PROMISE is an understatement of epic proportions.  Their doc, which chronicles 13 years in the life of their son, Idris, and his best friend, Seun, as they navigate their school years, doesn’t flinch when it comes to people losing their tempers, losing their faith, and, in one moment of the most powerful cinema I’ve ever seen, losing pride in racial identity. To see Idris as an eighth-grader ask Brewster in a voice that is quiet but infinitely sad, if it wouldn’t be easier if he were white is a moment of reckoning not just for this father and son, but for society itself. How Brewster handled that moment, with candor and nuance is also how he and wife Stephenson handled the other issued brought up in their riveting, visceral look at how schools, public and private, fail African-American boys. That’s why, though the film focuses on that segment of the school population, it’s a window into the larger issue of how even the most well-meaning of schools as both schools depicted in AMERICAN PROMISE are, fail kids in ways that break your heart and raise your ire.

The conversation October 28, 2013 also included the impact of unconscious racism, the book. Promises Kept, that the film inspired, and how the pair went about finding an editor to go through the hundreds of hours of very personal, very emotional footage. An editor that they could trust enough to get angry with. 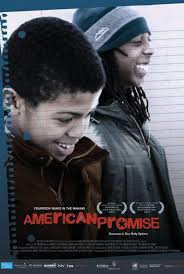