The Joyful Curiosity of Ben Mendelsohn 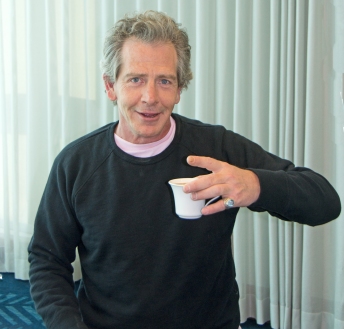 The first thing you notice about Ben Mendelsohn when you meet him in person is how very blue his eyes are.  The second thing is his impish sense of humor coupled with a penchant for being the perfect host (he insisted on ordering coffee for the both of us, hence it’s inclusion in my photo of him).

It’s at odds with the roles in which he is usually cast. Think the psychotic Cody in ANIMAL KINGDOM, or the calculating, bureaucratic evil of Orson Krennic, the designer of the Death Star in ROGUE ONE: A STAR WARS STORY.  Yes, I know that last attribution is in great dispute among the fanboys and fangirls, not to mention between Mendelsohn and Mads Mikkelsen, whose ROGUE ONE character, Galen Erso, also makes that claim.

When I spoke with Mendelsohn on February 15, 2020, it was the one part of our conversation that I could release before the embargo on his latest, and in his words, his favorite film (of those he’s seen), the unexpectedly life-affirming, and at times very funny, BABYTEETH, which made its Northern California debut at the Mostly British Film Festival here in San Francisco. In it, he plays the psychiatrist father of a terminally ill 16-year-old daughter (brilliantly played by Eliza Scanlen) who finds that his professional training can’t help when it comes to this kind of heartache. Mendelsohn has never been better than he is here, turning in a performance that is quiet, eloquent, and devastating in is emotional rawness and truth.

More about that this summer when BABYTEETH hits theaters.  Meanwhile, click on the player above to hear his take on that Star Wars controversy I mentioned, and what it was like for him, a self-confessed fanboy, to play a scene with Darth Vader.

This entry was posted on February 16, 2020 by Andrea Chase in Uncategorized and tagged Ben Mendelsohn, Death Star, Orson Krennic, Rogue One, Star Wars.