That last concerned the tempest over Ms Sarandon’s décolletage as she introduced the In Memoriam segment of the SAG Awards, but led to a discussion about cultural ageism and sexism. We also talked about Joseph Fiennes, a white actor, being cast to play Michael Jackson in a British production, which led to a discovery of our mutual bemusement over the silent letter “l” in brother Ralph’s name.  And then to a short course in the symptoms of vitiligo, the which was suffered by Jackson. And then to Maureen’s discovery of the albino lobby that protested the way that minority has been depicted in films.

Maureen is, as always, there to help people.

We did talk about new releases. Those would be KUNG FU PANDA 3, a film

that I liked a lot, and not just because it is a sequel to a sequel that is as good as the original, and LAZER TEAM, a cheerfully cheesy send-up of 80s Sci-Fi flicks that is a perfect popcorn flick after a hard day.

reening of THE MAN WHO FELL TO EARTH (with special guest co-star Candy Clark) at the fabulous Castro Theater, and a preview of SFIndieFest, the festival that is about more than just movies. Don’t get me wrong, there are terrific movies, including TOO LATE by Dennis Hauck that is nothing less than a bracing new and original cinematic voice in the vein of The Coen Brothers and Rian Johnson, but no other 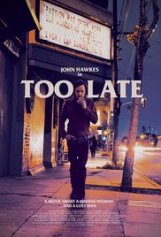 festival in the known universe has a Big Lebowski Party (complete with White Russians), a Valentine’s Day Power Ballad Sing-A-Long, and my favorite Super Bowl event, Men in Tights, with a screening of the game at the fabulous Roxie Theater.  Commentary provided by guys in sweaters who are less than awed by the plays, but who will remain absolutely silent for the most important part of the broadcast: the commercials.