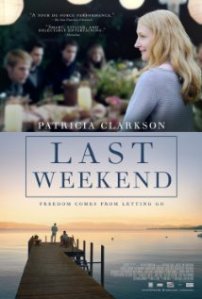 It was only right that when I spoke by phone with Tom Dolby about LAST WEEKEND on September 12, 2014, he was on his porch overlooking a lake. LAST WEEKEND, which Dolby co-directed with Tom Williams from his own script, is set on Lake Tahoe during an emotionally tumultuous Labor Day Weekend for the affluent Green family. One of the first things I askedDolby about was Patricia Clarkson, the goddess of an actress who plays Celia, the matriarch of that family who is coming to terms with her children being grown and the lake house she loves becoming as obsolete as she feels.

This was Dolby‘s directorial debut, and I was also curious about the advantages of having a co-director, how actors react to that, and what they would bring to his script that he hadn’t realized was there. He spoke eloquently about his remarkable cast, as well as why he chose to make a film of this story rather than sticking with his original plan, which was to write a novel.  He was just as eloquent when discussing his bemusement about the reaction his film has had in some quarters, including a strain of misogyny and anti-elitism that I, too, have found irksome at best in a film that is that rare and beautiful evocation of a woman struggling to find her place in a world that has left her behind.

This being Tom Dolby to whom I was talking, iand my own obsession with recorded sound being what it is, t would have been wrong, just wrong, to not ask the scion of the family that masterminded the eponymous sound system, about his approach to the sound design in LAST WEEKEND, Any sound design is tricky, but the one here is sublime, particularly when you consider how much of it was recorded by the waters of Lake Tahoe, and water being no friend to the process.

The one thing I deliberately didn’t ask about was the house used in the film. It belongs to Dolby’s family, which I’m guessing may have had an effect on negotiating the location rights. It’s also the house seen in the classic Montgomery Clift – Elizabeth Taylor film, A PLACE IN THE SUN. I’m sure he was talked out about it, but I want to be sure that you know what you’re seeing when you see LAST WEEKEND.