SEEKING ASIAN FEMALE is everything that a great documentary should be. Informative, straightforward, and challenging. In this case, deeply challenging. The phenomenon of Yellow Fever, non-Asian men who are exclusively interested in Asian women is a subject so fraught with political and cultural sensitivity, that even bringing it up has a unique set of metaphorical land mines. Debbie Lum (far left and below right), who has had her own share of run-ins with the Fever, took on what she describes as her worst fears in order to explore what the attraction, almost fetish, that Asian women have for some. What she found was as much an education for her as it is a revelation for the audience. Though her original intent was to interview a cross-section of academics, cultural commentators, and those with the Fever, she instead concentrated on one man, Steven (near left), 60-ish, not rich, and unselfconsciously, rapturously obsessed with Chinese women. Steven, after striking out once, and against all expectations, eventually finds Sandy (middle in wedding dress), a 30-year-old woman willing to come to America and marry him. As Lum observes him through the process of hope and rejection and hope again, she also becomes a character in the documentary, slowly but inexorably becoming an integral part of the courtship and the ensuing period of adjustment as Steven and Sandy get to know each other and contemplate the prospect of being together forever.

Less an expose of the objectification of Asian women, though there are certainly those elements, SEEKING ASIAN FEMALE finds a 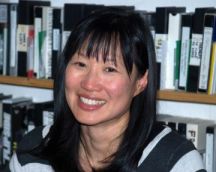 more universal theme, that of what it means to fall in love, and then, the hard part. Making a relationship work once each party’s illusions and expectations are challenged with reality. No matter what you thought coming in, you will have a new perspective as the final credits roll. You will also have a place to discuss that new perspective. Lum wants to keep the conversation going about the film’s issues. You can take part here at the official web site of SEEKING ASIAN FEMALE. You can listen to my interview with Lum about making the film here.